Check out this beginner’s guide and learn how to survive and win in Super Animal Royale. Discover the basic gameplay, survival tips, and more. If you’re one of the players who have been dying in just a few seconds after the game starts, this guide might help you survive.

Super Animal Royale is a battle royale game starring 64 murderous animals that want to tear you limb from limb. (not really). And let’s face it, you WILL NOT win your first match. If you do, you are a god or the other 63 players were all bots. The game starts when your inside of some weird eagle, then you drop on the map with your pickup keybind. (default is E). You must find a weapon and pick it up with the pickup button, for you to use it you must use your attack keybind. (default is left mouse button). Go ahead and try to shoot something. The default keys you use to move are W, A, S, D and the space bar.

You can’t start murdering everything without moving right? Now let’s talk about super jump rolls. This is a thing that all players must know. All you do is press the keybind. (Default is space bar).

It will make your character jump then roll on the ground, it also increases your speed. (for a split second.) Timing jump rolls is key if you jump as soon as you land you will get a 10% jump boost. You always move faster with your sword, not your gun. So if you don’t think you can handle a fight, just jump out! (with your sword). There are four weapon slots. The first and second are for guns, the third is for your close-range weapon, and the fourth slot is for grenades.

Picking up armour can also help absorb some damage so you don’t die instantly. Armour is picked up with the pickup key. Healing items (besides the coconuts scattered across the dessert) will instantly be picked up if you are close enough. (the default bindings for switching your weapons are 1,2,3,4, and your mouse wheel)

All the extra information for weapons can be found in your inventory. Things like bullet speed and whatnot. ( i is the default keybind to open it) Hover over a weapon/item with your mouse with your inventory open to learning more about the item. 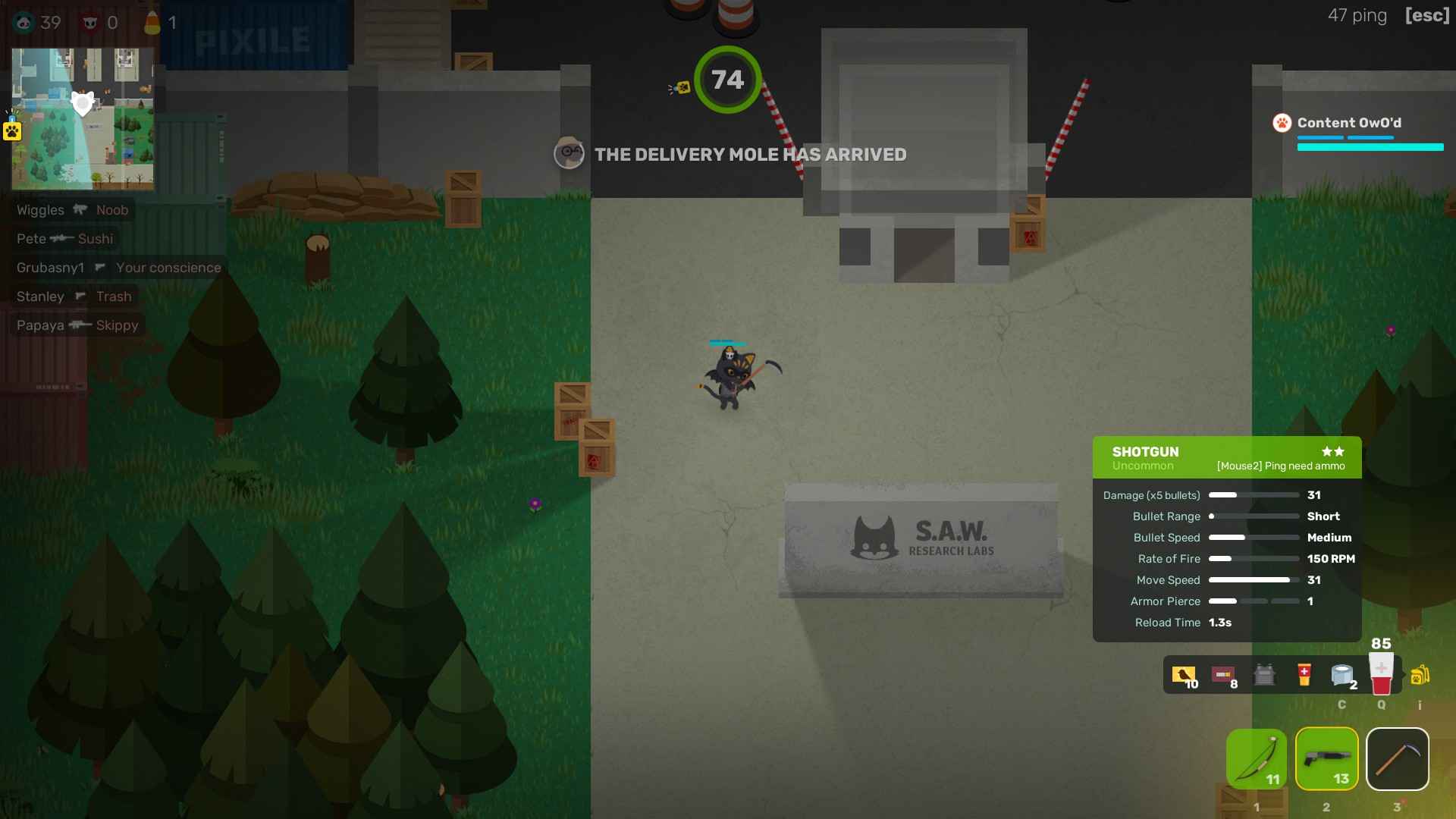 Here we cover the world of grenades, but there are only three, plus one of them cant hurt players directly.

Alright, you cannot see through objects. Every item and enemy that is in a shadow cannot be seen. The lighting works as if you’re a light bulb. You can use this feature to your advantage and approach the enemy from an unexpected angle! Or to pull off an unexpected sneak attack!

This game also has a “safe zone”. A weird toxic gas that I guess Super animals cant breath in. Don’t go in the gas unless you want a slow and painful death. It’s also a good idea to not go into spaces with only one exit of you know someones nearby. Always go into spaces with more than one exit if you need to heal or reload. However this does not always work, sometimes you need to trap yourself and camp if you’re in good condition and waiting for the attacker to follow.

Camping, however, can backfire. I don’t lose to a camper most of the time. If you think someone is camping, gain some distance so they cant hit you with a shotgun or something. Or throw a grenade behind the corner, and get your weapon out when they flee. Make sure you have enough space to dodge enemy fire as well. It’s hard to make a tight squeeze escape for me, and I often die while I try. Also, give teamers no mercy. It’s an offence to the team.

In some time in early development. The devs added items. Things you can pick up that don’t go in your inventory slots. These items can give you a huge advancement if used at the right time. I don’t have screenshots of these, but I can describe them.

There are four ways loot can spawn, you can find it on the floor, in chests or mole crates, or they drop from an enemy when they die. There are also five-item rarities, Each one determines the stats of the item.

The weapons in the game are not just simple weapons as they can be equipped with perks that can be useful for your survival.

If you are ever in a fight and you have the same level of armor and you are in a cramped space, you will kill an enemy faster with an SMG. Armor loses health if its hit by any kind of bullet, (excluding poison darts) And this is better with a high rate of fire weapon because it will shred through the enemy’s armor faster, and you will start attacking the health sooner than your opponent.

For those who are still not familiar with the controls, here are the default controls in Super Animal Royale. That's everything we are sharing today for this Super Animal Royale guide. This guide was originally created and written by RB Staff. In case we fail to update this guide, you can find the latest update by following this link.