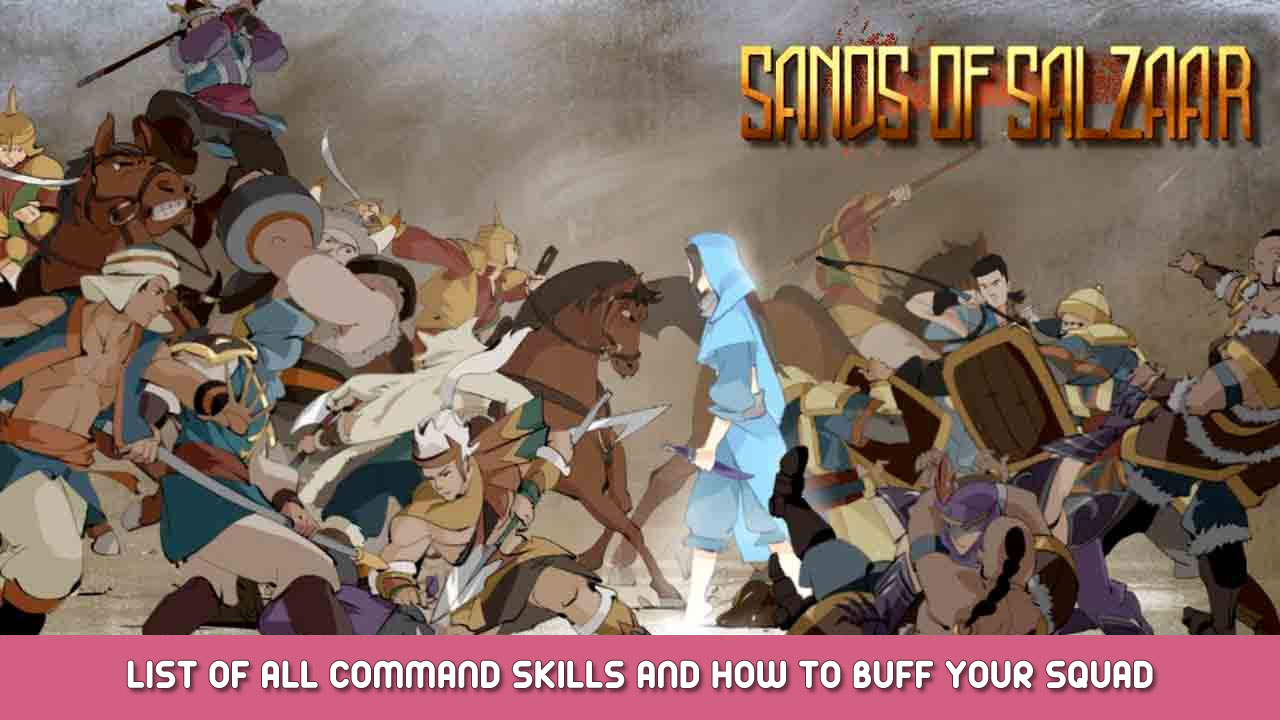 Some buffs are better than others–clearly–but the most important thing is knowing that the buff functions with your units!

If you know what kind of army you want at the end-game, this list will help you look for the best characters to aid your army via their Command Skill.

For example, if you are trying to build a Thur Warmonger army, then you are looking for Melee and Heavy Armor buffs. Dhib Swordsmen: Light Armor, Slashing, Melee. Et cetera.

Once you know who you want, you can open the Map (“M”) then hit “World Map” then you can hover over every town looking for the NPCs that work for you.

P.S. I don’t think Command Skills apply to Characters, only the Squad. So don’t waste time tinkering with your character’s Armor and Weapon to try to gain the benefits of Command.

Ruha’s Command skill applies to “non-Heavy Armor” and I don’t know if Knight and Fortified are separate and distinct from “Heavy” or not.

Even if I thought I knew, of course, I have no idea whether it’s coded the way they wrote it.

To recruit an NPC you need a relationship status of [20] Friendly, or better.

Start your game by adding the most convenient NPCs to your party, without respect to their abilities or Command buffs.

Then, play the game as normal using your random NPC’s

Of course, you should upgrade your NPCs for ones with better abilities/utility whenever possible, but with respect to the NPCs with Command Skills:

When you see one of the NPC’s you really want (an end-game Character) in a Tavern, give them a Gift and ask if they have a quest for you.

If you have NPC’s that you are recruiting because of their Skill Trees (rather than their Command), hire them as soon as possible!

You want full control over their Skill Points and skill trees. (Or else you will be wishing for more Wisdom crystals, which you get by going to the Libraries once a month.)

When the “Party Event” pops up on the bottom right, be sure to save before opening it. This gives you the option to save scum to achieve the best results.

If you REALLY want to cheat during a Party Event, you can go to a town, save carefully, view the results, reload the save, then kick out everyone in the party who has a negative response.

After resolving the event, go to the Tavern and Recruit them again!

Not Everyone is Created Equally

The list is very incomplete*, but it should give you an idea about what you are looking for in a good Character with respect to their Skill Trees (as opposed to Command).

* And is very wrong that Threnody doesn’t have enough active abilities!

I might also mention that “Heal an ally” is mostly useless (regardless of whether they earned a (*) rating or not) — don’t bother with Healing unless it’s AoE.

The most character heals and self-heals are inconsequential, such as 150 + 1.5x Physical Attack for ONE CHARACTER. Better to let a character die and revive while spamming attacks than waste time healing 5% of their HP.

In general, avoid minor or modest Skill Tree buffs and heals that are not passive and take time (and Mana!) in battle. In general.

With respect to unit healing:

The one situation in which you benefit from Nasir-style targeted healing is if your Squad is composed of armies with few units, such as Rams and Ballistas and Special creatures.

That's everything we are sharing today for this Sands of Salzaar guide. This guide was originally created and written by JCalton. In case we fail to update this guide, you can find the latest update by following this link.